Friday was our High School Musical 3 day! Joey surprised the girls with the soundtrack in the morning, so we jammed to it while eating breakfast and getting ready for school that day. AND in the car on the way to school. AND in the car on the way home from school. AND on our way to the party. AND on our way to the movie. We knew all the songs before we saw it! (which was the goal-I think its more fun to see something when you know the songs!) Check out the girls moves in the morning before we took them to school....okay, well, check out Ella's moves. Cali was cuddling with a bear and Aubrey was being a little camera shy.....

Then, after school we headed over to a friends house for a High School Musical 3 tailgate party. The kids got their face painted, made pompoms and ate lots of treats! Thanks McFadden family for inviting us! 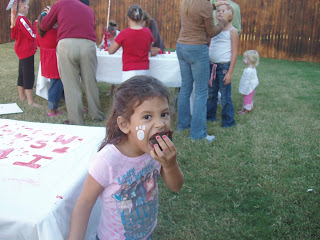 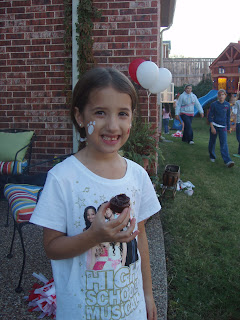 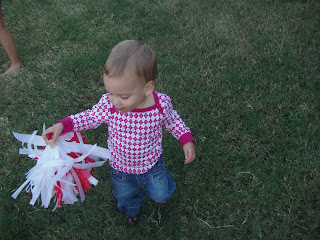 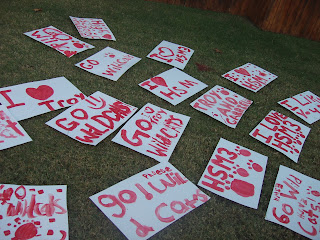 Then we were off to the show! I thought it was a really fun movie. Great music and even more elaborate dance/song numbers than the first two movies. And I loved that this one actually went to the movie theatre instead of premiering on the Disney channel. I give the movie 2 thumbs up! :) I admit it-I totally love these movies as much as the kids do! We had fun shaking the pom poms, screaming and clapping at the theatre that night!
My aunt Cindy came with us, which made it even more fun! Thanks for coming Cindy! I'm cool with the fact that Aubrey chose to sit by you instead of me....sniff sniff:) lol. 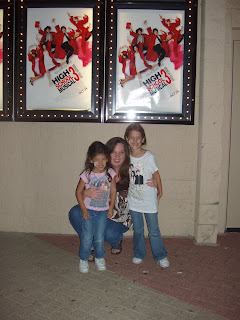 This is one of MANY lame attempts to try to get a picture with us jumping in mid air(I was tired by the end of the night from about 10 different jumps. That shows you how in shape I am.) It was hard to get the picture to take while we were in the air! This shot is pre-jump. 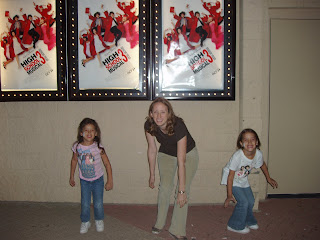 Here is post-jump. I hurt my shin. It hurt a little, but I'm dramatic sometimes so its looks as if I broke my ankle:) 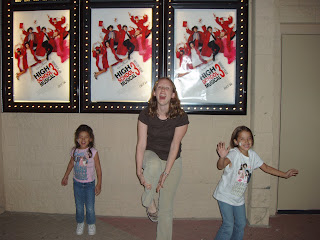 Finally! We got a good shot! Look at those girls jump! 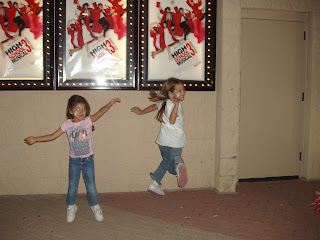 It was a busy fun day with as much High School Musical, red & white, I love Troy and "Go Wildcats!" as we could possibly squeeze in!

It look like the girls night out was a hit! :) I'm glad you were able to take them.

thanks joey for watching cali during the movie! (forgot to add that in there. me bad wife.)

Looks like a fabulous time was had by all!! I love High School Musical anything!

I knew you would love this -- what a fun family adventure!

It was so much fun!!! Thanks for letting me tag along. And thanks to Aubrey for wanting to sit by me ~ I do say, that melted my heart!!

Your pictures are soooo much better than mine, but I'll attempt to post mine later today ~ check 'em out, they pretty funny!!

Go Wildcats! I love the "jumping" in the air pictures. It's too bad you weren't in the last one. That would have been great! Glad y'all had a fun time.

we are holding out to see the movie on Cami's b'day on Thursday--you gave me some good ideas for a fun night--have I told you what a COOL mom you are?!?!?

Glad you guys had a fun evening. Can't wait to see the movie. Go Wildcats!

I think I love your expressions more than that movie..

I'm sure you guys will remember this day for a long time. A tail gate party! Wow, what a fun idea!!

P.S. That sure was nice of Joey to get the soundtrack. He is so sweet!

Oh what fun....I love it!!!
Maybe I can take my grand-daughters to it...but we won't have all the preshow fun that you all did.

Hey did you feel me sending hugs when we were in the Dallas airport?? I was sending special Texas vibs your way.

My son needs to use his computer so I'll say bye....just wanted you to know that I was thinking of you.
Love, Lura

we enjoyed the movie too. it was definitely a heavier movie in comparison to the first two. we liked it a lot.

Caleb loves High School Musical too. He's been waiting and waiting for it to come out, and I told him I would take him to go see it, but we were a little broke this weekend. (tear) Maybe next weekend. I'm glad you guys had fun! And Cali is so sweet with her teddy bear. I love it when little ones are like that. :)

I loved all your celebrations for HS3. Joey that was awesome to get them the sound track bet that sure set the tone for the day and how exciting for the girls you guys are all awesome. The party how cool is that, the pom poms the posters that's so cool wish I could have seen it all thanks for posting on the blog we all feel like we were a part of it. Glad to see a good time was had by all. You should send Disney pictures of your pre-HS3 movie events with your family and all that would make such the cutest commercial. You guys are great. love nana

I'm so glad I talked to you before I saw the pics because the jumping ones made me laugh so hard ( a little pee ALMOST came out) Fun party- you have the coolest friends that do the funnest things!

That is awesome! I have never seen any of these movies.

Love it!!! How fun!! Sadly I still haven't seen it myself...my girls got to go to a HSM3 party...they even got to ride in a limo to the theater!! They had a blast!!