Aubrey entered the annual Reflections Art Contest this year and won 2nd place in the Photography divison! We are so proud of her!

This is her award-winning photograph. She took this completely on her own and with own little camera. That day at the Heard Museum Dinosaur exhibit she was clicking away. Isn't it awesome? It is so clear and the color is so vivid. 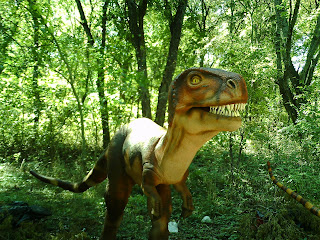 The school had the entries displayed during school Wednesday afternoon and all the kids that entered got to come to a popcorn party. The parents/families were invited too. It was lots of fun and we were able to see all of the other kids awesome artwork along with our Aubrey's(whose was the best in our opinion:). 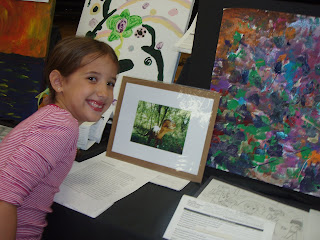 Last night the awards were announced at the PTA meeting. We already had been informed Aubrey was a winner(but we didn't know what place she received until they announced it). We decided to keep it a secret and not tell her. She was really surprised and happy when they called her name. We were all smiling and taking pictures:) She is most excited that her picture will now go to the regional level and compete with other schools in the area. GO Aubrey GO! 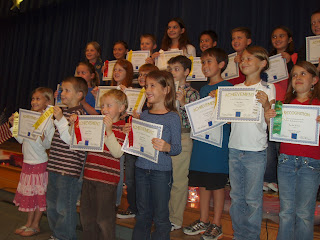 She is following in the footsteps of her Daddy. Now we have 2 award winning photographers in the family!

Way to go Aubrey! Congrats on the award. Good luck at regionals!!

WOW she must be so proud of herself way to go Aubrey!!!

Congratulations to Aubrey! You have a real talent there. I can see that she will go far in life with this. You and Joe must be so proud and rightfully so!!

Good job Aubrey! I love your picture! You are so talented- just like your dad!!

THAT'S MY GIRL! CONGRATS AUBREY, WE ARE SO PROUD OF YOU! - DAD

looks like it runs in the family. congrats to aubrey!

Congratulations Aubrey that is such an awesome picture. I love how you captured the lighting and it looks like that dinosaur was actually posing for you. I bet daddy feels like a real peacock and spreading his feathers that his little girl loves photograpy as well. Yeah for Aubrey.

How awesome! I bet Joey is so proud! Way to go Aubrey - shine on!

Way to go Aubrey! I love the picture. Good luck at regionals!