Last night Joey and I felt very sad...sad for our nation and the choices it is making. I definitely feel now more than ever that these are the last days. We voted for who we felt was the better choice. We did our part and thats all we could do. Now it is time to move forward and continue to do what we can to keep America the "Land of the Free and the Home of the Brave."

I read this quote on my friend, Tib's, blog this morning and I agree 100% with it:

"Barack Obama was not my choice, but he is my president(elect). That is true of all Americans. For the last eight years, there has been an ongoing campaign of destruction meant to handicap and hobble the last president. I refuse to be part of an effort to do the same to the next president. Those who didn't vote for Barack Obama must set a higher standard of civility and citizenship than those who didn't vote for George W. Bush. In defeat, there must still be nobility.The last eight years have taught us what happens when you set out to destroy a presidency for political gain. You help your candidate, but you hurt your country. That pattern must not be followed with this new president. America must treat Barack Obama better than he treated George W. Bush." Bob Lonsberry 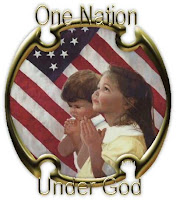 I too pledge to be kinder to Obama than his party was to Bush. Though he wasn't my choice for President and as much as it bothers me, he won. After he is sworn in, he will be the new President of the United States. We have been taught to honor and respect the leaders of our country and I plan on doing so. This doesn't mean I agree with his values, his ideas or choices. I do not and will not. I will just pray that this country will continue to be blessed and that he will be guided to make better choices than what I am expecting. And mostly, that U.S. citizens will keep God part of this country. Too many people are trying to push Him out. He is the foundation from which this great nation was built. If we keep Him center, our country will be protected and blessed. I hope we always remain "One Nation Under God."
Posted by hoLLy at 11/05/2008

And hopefully only 4 years ;)

I agree, I hope people continue to keep God part of this country. Thanks for sharing your thoughts and feelings.

I thought my husband was going to cry--we can just hope Obama doesn't do anything he says he would! We already started praying for him.

I, too have been feeling like the last days are near. Perhaps that's why the Prophet asked us to pray for all countries to open up to the gospel.

I'm so glad I still have friends with similar beliefs! It gives me hope and strength!

ditto heidi! it is nice to have so many friends that have the same values that i do. thanks for your comment and for checking out my blog today:) i miss you!

Amen to all the above -- love your thoughts as always. Same feelings and thoughts we are having here as well.

I almost got a little teary eyed last night as well. And amen to that!

Yes, we can pray that he might change his mind on some of his earlier positions. Maybe the power of the presidency will make him stop and reflect on the responsibility he has to keep our nation strong!!

I totally agree and keep thinking all I can do now is PRAY that this country doesn't totally loose all values and morals. It is for sure a sign of the times when soo many people are for things that are just wrong.

I wanted to cry too. I know I'm not an American, but I know that the President of American is one of the most powerful and influential men in the world and that what he does impacts the whole world in a very real way. My heart aches, but I must trust in my Heavenly Father who I know is at the helm and pray that Mr Obama will be a good president and that AMERICA will remain strong and as you say "One Nation Under GOD!"

I agree with all you and your friend has said.

I am sad but he is my President and I will respect that office.

I am thrilled over 8 passing.

You are so right! Not our choice but still our President! Hopefully our prayers will help the cause!