I decided last-minute Friday night to attend the local Borders Twilight DVD Release Party. I talked my mother-in-law, Cyndi, into going with me(even though she hasn't read the books or seen the movie-what a good sport:) and we had so much fun! We had heard one of the stars or filmmakers would be at this particular Borders(of course I was hoping for a star) but weren't sure if the rumor was true. Close to midnight, the director of Twilight, Catherine Hardwicke, walked through the door! So, it wasn't "Edward", but it was still a big name and I was psyched! We were able to meet her and get a few things autographed. Totally cool. Here are pictures from that night. . . 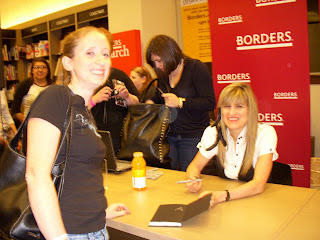 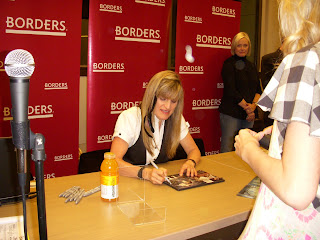 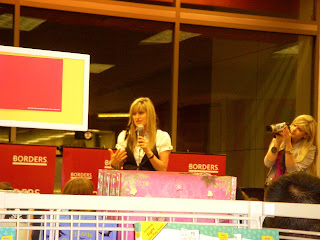 Catherine was a genuinely nice and friendly lady. I love this picture of her with a huge fan of hers who is also a special needs teen. Catherine stood up, walked over to her, hugged her and kissed her cheek and talked to her for a little bit. This girl had watched Twilight 14 times in the theatre! Wowsas. Thats Twilight love right there. 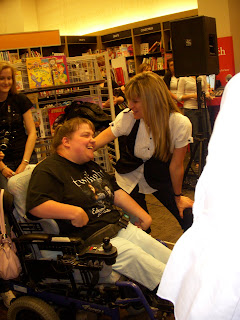 Me and my partner in crime:) Thanks for coming Cyndi-I had so much fun with you! We made some fun memories. 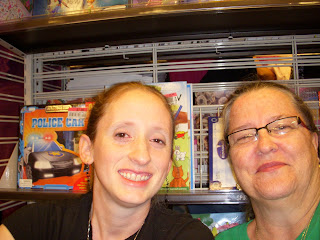 I made a new friend, Katie, while in line waiting for the DVD. We even exchanged emails so we could send each other our pictures. She had dragged her mom along too(who also hadn't seen or read anything Twilight related:) It was fun to be in line with a couple of gals who had something in common with us! Katie and her mom were supa fly. I need to find out if she Facebooks. . .:) 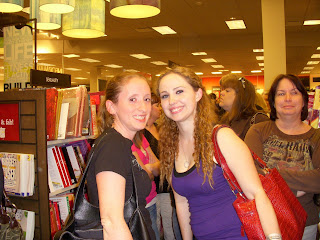 The two girls that do the podcasts on the Twilight Theories website were there hosting the so-called "party"(which consisted of these girls talking about themselves all night long and one lame game). I have to say I thought they were annoying and a little full of themselves. I guess I'm mean, but I just call it as it is. 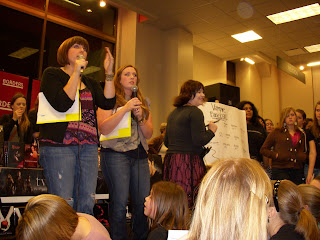 The end of the night consisted of Cyndi and I chasing Catherine to her hotel room and then singing her Bella's lullaby through her window. Ok, just kidding, but we were behind her car when we left. And of course, I HAD to take a picture for fun:) 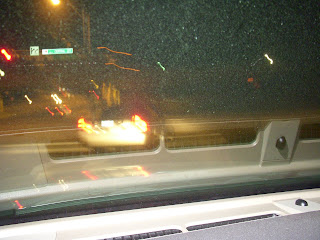 I thought you would have invited your best friend to go with you. :) j/k glad you guys had a fun time.

i decided pretty much last minute to go. i did announce it (and invite people)on facebook beforehand in case anyone else wanted to come along!

girl, no you DID NOT switch to a condensed feed???!!! agh! noooooo!

Looks like a very fun night. And your new friend the director looks like a pretty down to earth cool lady. I heard she wasn't directing the second one. Did you hear the real scoop at the party?

How exciting Holly! I am still eagerly awaiting the arrival of Twilight, the movie, in my post box. I have not seen it yet and can't wait! Loved the picture of you with Cyndi!

You lucky duck! I went to our Hot Topic. It was a real bummer, no games or anything. I just sat on the hard concrete floor for 2 hours. I did get my DVD though and love it!! I'm glad you were able to go!

I think it's so awesome that you got to meet her! I'm so jealous, but I'm glad I didn't end up getting the DVD at midnight, as I wouldn't have had such a rewarding experience as yours. :)

That looks like so much fun! I'm glad you were able to meet her!

You are so lucky. How fun. Were you so nervous? I would be all red faced and blubbering.

How fun for you... I am just starting to read Twilight... I guess better late than never.

How fun!! What a wonderful lady she seems to be! How fun! Way cool Holly!

Well it was definitely an adventure. I was afraid I would be asked some really serious question and well let's just say it would have not been the right answer. So what did I learn....hmmm.....ahh Alive really knows how to get rid of a headache (just snap that puppy off), the Collins family well in need of some serious ahhhh makeup? Edward, well he is cute but I'm not too sure about those eyes a little too spooky for me especially when he's standing in the room and ahhh how did he get in there again? Now Bella, she's a smart girl and thank goodness for the internet so she could find out all that information wheew google your the best. And Victoria (is that name right?) well, cliff hanger ahhh yeah!! It was different and I did learn more than I knew about it and then we watched the movie the next night so ahhh good movie. Ahh gosh Holly you weren't going to tell about us singing that lullaby shessh. j/k The chase at the end for the license plate that was cool woo hoo we are papparazzi for sure you would have thought we were chasing Edward no Bella no Alice no Team Jason no Team Jacob no the Collins family Ahhhhhh oh yeah that's right it was Catherine she was very very nice. Now those two women well let's see hmmmm ah not checking out their pod casts any time soon heard it all that night. They gave a new meaning to the game of baseball. Glad I could help out that night even though I really didn't know anything about it all, it was fun and the book isles well, will leave that for another post. Sorry for the long one this time OOOPS, it's a twiglight effect I guess typing so late........

Darn I meant to say Alice ugh that's what I get for not proof reading Alice knows how to get rid of a headache. Dah!

YIKES another typo HELLO the word is Twilight.