I like my little girls hair to be long. Thats just how I like it. Plus, I think their hair is just gorgeous. I hate to cut it at all! So, I wait until I think it really looks like it needs to be cut/trimmed before I let scissors touch it. With Aubrey, she was probably 3 1/2 when I trimmed it myself. Her hair grew fast. And then when she was 5, we took her to get her first official cut at a kids salon. And then with Ella, well, her hair took FOREVER to grow at first so it was just last week, at the age of 5, that scissors finally touched those beautiful curls. She was SO excited to go to Snip-Its, this really cute kids hair salon. We don't take the kids here for all of their haircuts, but we take them here for their first to make it extra special:)

I had to use my phone to take these pics, so they aren't the best, but enjoy! 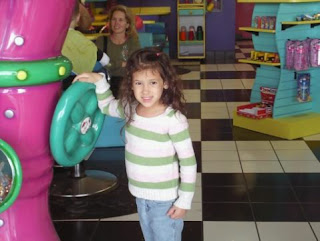 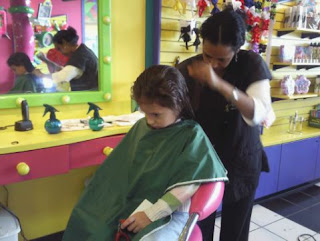 She got to put this special haircut card into a machine to get prizes after she was done-a hair scrunchy and a lollipop! 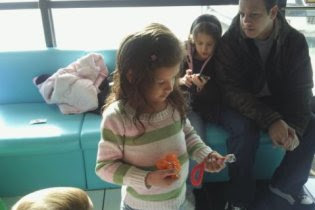 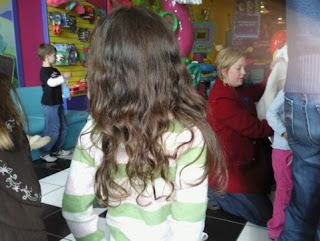 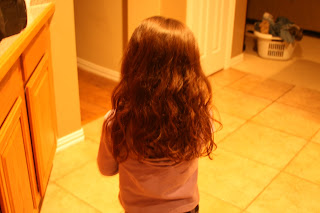 How exciting to have your first hair cute. You are so cute. I think that was extra special that your 1st hair cute (cut) was at such a special place. It looks gorgeous and you are gorgeous. Hi Aubrey I see you in the pictures too. love Love LOVE IT!!!

How cute. I didn't even know there was such a beauty shop. I'm going to suggest prizes to my stylist on Saturday when I go in to have my hair dippity-dooed.

How sweet she looks. What a wonderful experience this has been for her. I Love how you try to make each milestone for your children so very special and I like even more that you share them with us!

so fun! you're such a great mom!
i need to get rylei's done too, just looking a little ragged.

I can't believe you made 5 years without a hair cut. My girls grow mullets so we have to start trimming at about 1 1/2. But I do love her beautiful curls. She's so darling!

So pretty! She looks perfect - -love it!

How cute! Your girls do have beautiful hair.

Wow! It does look so much fuller and healthy.

Thank goodness. When I say that she was getting a hair cut internally screamed "NO! She has perfect hair!" I was relieved to see that it was just a trim. You are right, your girls have beautiful hair! Looks great Ella!!

Aww it looks great! And agree - it looks so much thicker now!

Glad it was just a trim - I love love love Ella's hair!