So, I was going to title this "Ella's pumpkin patch field trip", but then I thought, nah. I'll title it what really made her excited-getting to ride a school bus for the first time ever! I was able to go with Ella on her first kindergarten field tip to a nearby pumpkin patch(thanks Joey for watching Cali so I could go!) last Friday. When Ella woke up Friday morning, she was singing, "I get to ride a bus today! I get to ride a bus today!" over and over again. The excitement was so adorable. She could care less where the bus was taking her:)

Here she is with 2 friends waiting for the bus to start moving. When the bus finally did start moving, all the kids were cheering. They were so thrilled to ride a bus "with no seatbelts." 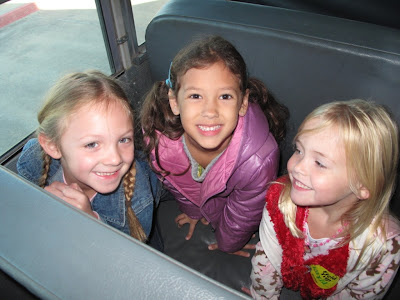 Once we arrived, the first thing we did was feed farm animals. The kids got to feed goats, sheep, cows and even Texas Longhorns(Hook em Horns!) 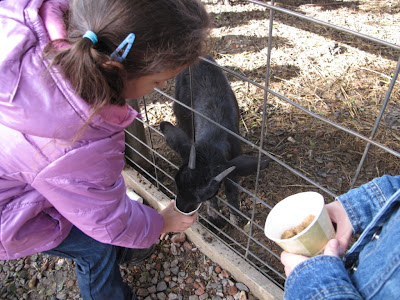 Ella was a little nervous to feed the cow with the huge mouth, but she did it! And she didn't lose a finger-phew. 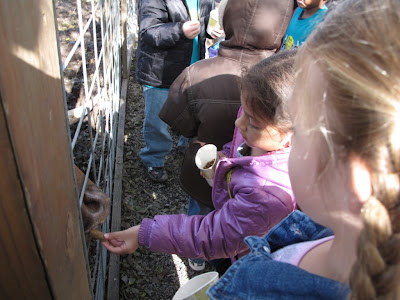 One goat grabbed the cup right out of her hands. Totally freaked her out and she ran off! I had to take a picture and while I did some worker came over and grabbed it from the goat like it was an emergency and it could kill him. Oopsie. I just wanted to take a picture! I was going to grab it-honest! Shame on me. 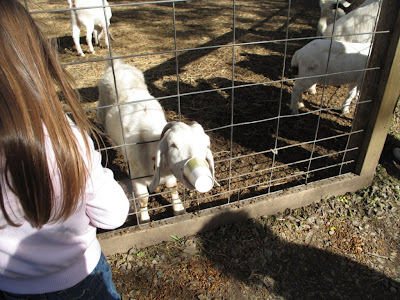 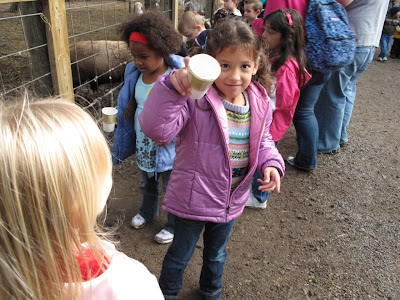 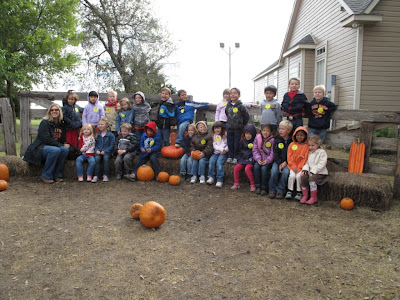 Picking from the patch-it was an actual patch. Pretty cool. I still like Flower Mound Pumpkin Patch better. More fun stuff in my opinion. But picking a pumpkin from an actual patch is pretty awesome too. 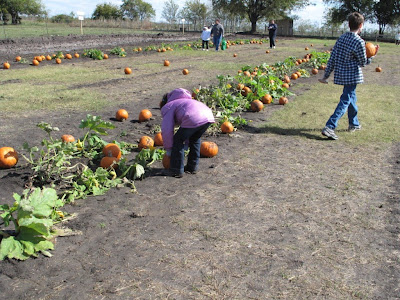 Ella and her friends with the pumpkins they picked out. These were the 3 little girls I was in charge of-they were angels. 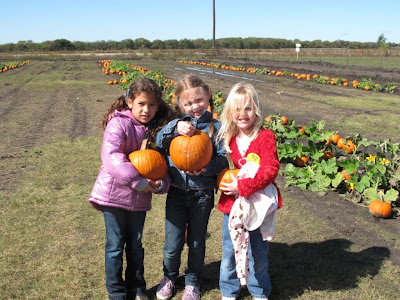 All in all in was a fun day. There was about an hour of torture while we had to wait for the hayride. It was morning- very cold and very very windy. Kids were shivering and almost purple. Some kids parents didn't dress them warm enough and there were actually some
tears:( But we survived! And once we were on the hayride, they were all smiles again. After the hayride the kids ate their little lunches, played on a playground and then we were back in the bus on our way home. I was so glad I could come. I had missed Ella's first preschool field trip last year and was really disappointed so it was really sweet of Joey to make sure I could go on one this year. It was fun to be there to watch Ella's excitement as the wheels on the bus went round and round:) And now Ella can say she rode the big kid bus(which she is very proud of). Woohoo!

Wow Ella how exciting to see your happy face with your sweet friends riding on the big bus. I love that you got to pick out your pumpkin from a real pumpkin patch that must have been so much fun.

I think we should grow pumpkins next year. :o) Glad you guys have fun!

Congratulations Ella on the getting to take an exciting Bus ride. It looked like the pumpkin farm was pretty fun too!

How nice of Joey to take care of Cali so you could go with Ella. It looks like you had a great day in spite of the cold. I wish that you would send some of that cold to us. It is in the 80s here and quite windy. I hope that does not mean that the hot santa ana winds are coming soon. I hate those.

I love all of the pictures you took...even the one with the goat with Ella's cup. You are such a good mom. I love the way you enjoy each experience with your sweet girls. You are making so many treasured memories. Good for you.

Have a great week. Love, Lura

I'm so glad that you were able to go with Ella and enjoy the day together! I really enjoyed all the pictures. What a sweetie pie your Joey is!!! xxoo

Dax can't to ride a school bus. Whenever he sees a school bus he always asks me when he can ride one. Glad you were able to go with Ella on her field trip. Looks like she had a good time.

Yay for the bus ride. boo for it making you sick!

These pictures are ADORABLE!

Check out my blog page! You WON the contest! I need an address to mail the package to you!

Send me a private email with your address! Congrats!

I love how excited they all were on the bus. How cute! Glad she had fun on her first bus ride.

Hey, we were at the pumpkin patch on Friday too!! (Soooo cold!!)

How fun!! Field trips are the bestest!!! Yay!

Yeah for bus rides - and yeah for simple pleasures in life!