I haven't posted any recent pics of the puppy lately, so I thought I'd post a couple of cute ones. Zac loves to steal the kids rubber snake(sorry Sarah-I know this will freak you out:) and chew on it. He sometimes gets his entire body wrapped by it. It looks so hilarious. I wasn't able to get a picture of that, but I still got a couple of good ones. And don't worry I supervise him to make sure he doesn't strangle himself or something. But this is seriously one of his favorite things to play with. Check out our cute lil guy. 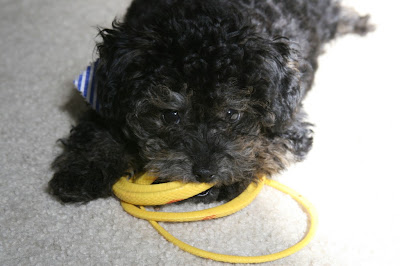 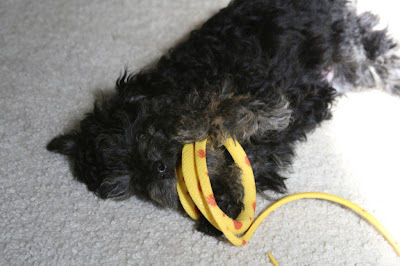 Some friends have asked how he's doing. He is doing SO great for his age. He is a friendly spunky guy who we already love so much. But, I'll admit he is still a work in progress:) We've only had him about a month and a half but I think he is learning fast. He has his good days and his not-so-good days as far as housebreaking goes. He has learned to go on his little puppy pad in the house(but still has the occasional accident in his "area" aka the kitchen.) He mostly goes outside though. He will occasionally try and chew on a rug or the wall(Joey bought "Bitter Apple" spray and its working). But other than that, hes a keeper! The girls adore him. He loves to follow us around and play. He loves to play fetch, sit, give kisses and jump. He is crate-trained and will actually go into his crate himself every now and then to chill. He doesn't bark at night(never has actually!) There have been tough days since I'm dealing with a 2 year old and a puppy, which is like two toddlers:) But overall, I'm still happy we bought the lil booger. He hasn't ruined my life like everyone told me he would-haha:) He has brought so much laughter to our home! We love you Zac! I mean, how could we not? He is so darn cute.
Posted by hoLLy at 11/15/2009

He is so cute. He is a darling new member of your family.

When we got Heidi from her breeder she gave a good tip on how to house train her. She used this idea on all of her puppies and told me to try it. I did and it worked like a charm. You might try it with Zac.

She told us to always keep Heidi on a leash and close to us when she was not in her crate. Jan said that a puppy will not go potty in their crate so we would take her outside to go potty first thing in the morning. Then by keeping her on a leash we could keep an eye on her any time she was not sleeping in her crate. We took her outside to go potty every couple of hours when we were home. When we were gone we kept her in the crate. By keeping her close to us on a leash she could not form the habit of running to a remote spot in the house and going potty. We did this for a very short time and then she was perfectly trained. I really couldn't believe how easy it was. If I remember correctly it only took a week or so to train her.

I don't know if this is something you would want to try but it worked great for us. Jan says that it has always worked for her too.

Also beware of using the leash idea for training. It forms attachment issues.
Those days of keeping Heidi by my side must have made an impression because she follows me from room to room through out the day. If she has her way she even accompanies me in the bathroom. If I don't close the door tight enough she pushes it open...lol... all I don't need it a dog as big as a horse coming in drinking water out of the tub when I am enjoying a bubble bath...Ha!!!

You realize it is now Heidi's House you all are simple servants who's hearts Heidi has captured.

I have always found that if I had a basket that help only my dogs toys then they knew that was the only things they could chew. It set limits and worked great for us. I would ask Tara.... the animal whisperer.

awww...he is so sweet Holly. He just gets cuter and cuter. I think all kids should have pets. I do love that picture of you and Joey on the side. What a romantic looking couple you are! xxoo

Zach so cute! I love the funny things puppies decided to play with. My dog growing up was all about bananas.

Aw, he is super cute! I see what you mean about him getting bigger and looking older, but he's still very much a puppy. ;)

He is adorable! Be patient and before you know it he will learn what to do and not to do. Good luck until then!

Good luck! lol but he is a cutie!

I hope things continue to be good with Mr. Zac! He is too cute with that rubber snake!

He is soooo adorable. I love those pictures. I bet the girls just love having him around.

I am so delighted you are happy with Zak...it warms my heart to see him with such a loving family. No puppy is perfect but teach them when they are still young and it will go far. All my best!