So, my kids heard about Elf on the Shelf last year and were dying(Aubrey especially) to have one this year. I may have mentioned this to my parents. . .and whaddaya know, we got one! (gotta love Grandparents!) Last week, I wrapped it up and we surprised them with it. We had my parents on webcam so they could feel like they were here:) My kids were beyond thrilled and so surprised. We named our elf, Buddy, since "Elf" is one of our favorite Christmas movies of all time.

I don't know if this smile could be any bigger. . . 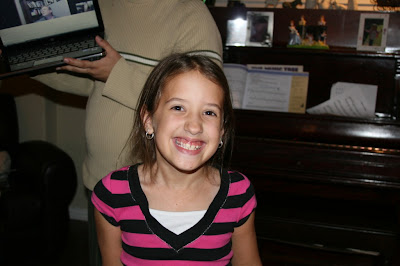 Ella being silly talking to Buddy in the tree. Either that or she is putting a curse on him. 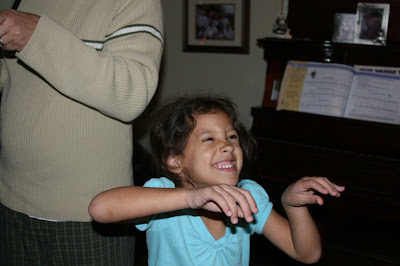 Buddy just stared and smiled. And then Aubrey swore he winked at her. I said there was no way he winked at you. He winked at me. Cuz I'm hot. 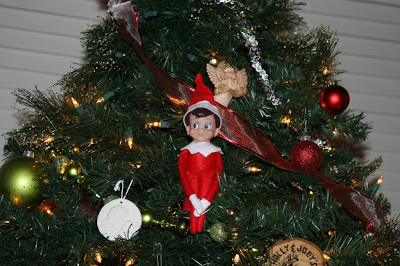 So, for those of you unfamiliar with Elf on the Shelf, its basically a book that comes with an elf. And its not just any elf, its a magical elf that goes on trips to the North Pole each night to give Santa a report on your kids behavior. (This is great to use against your kids. For example,"The elf is watching and you better stop it right now or hes going tell Santa tonight!") Not that I've ever said that. . . The real fun is that the elf is in a new spot each morning and the kids get to find him. They wake up and race around the house every morning-it is so cute. The most important rule is that they aren't allowed to ever touch him or he will lose his magic. They have done great at following this rule. Aubrey & Ella seriously almost had a heart attack the other day when Cali was about to grab him. Serious. Heart. Attack. I think if she were to touch him, they'd cry. Can't lose the magic!
Here are a few of the places Buddy has hidden. . . 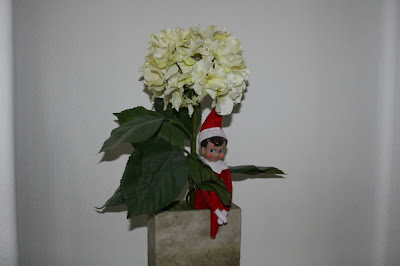 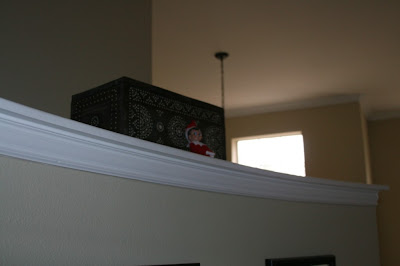 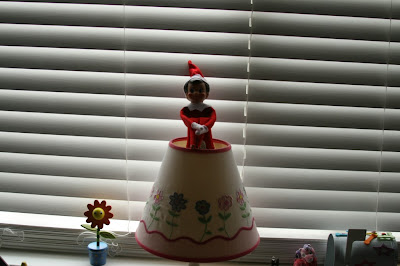 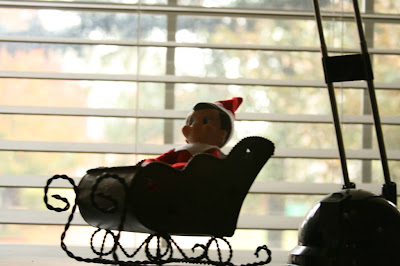 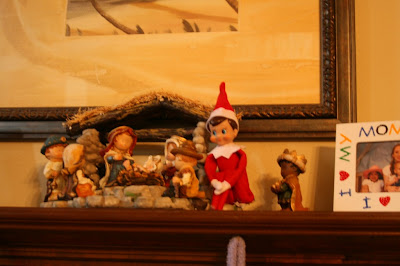 This will be such a fun tradition! Thanks Mom & Dad! I'd totally recommend this to anyone that has kids! It adds even more magic to the Christmas season.
Posted by hoLLy at 12/09/2009

My kids adore the Elf on the Shelf and it is such a fun tradition. Ours came from grandma and grandpa too.

We had our cousins over who are not familiar with the Elf on the Shelf and they did indeed touch him. There was a lot of worry and frustration and yes, even a few tears. My eight year old even pulled out the book to read what would happen because she was so worried. Thankfully it says if you touch he "might" not come back. That "might" saved the day at our house.

Hi Holly! Thanks for your visit--nice to meet you! Your family is just beautiful! I see your an LDS girl, too--wonderful!

Don't you just love Marie? The first moment I went to her "English Kitchen" I just fell in love with her! So glad you found me there so I could follow you back to your place...

Hope you're having a wonderful Christmas time with your beautiful family!

I see Julie made her way here Holly! Isn't she a sweetie pie! Speaking of sweetie pies, I love your girls and I LOVE this elf on a shelf idea! Where can I get one??? I must have!

How cute!! We had not heard about it! Your parents are so fun!! Love the vintage look too!!

Elf on a Shelf is HUGE where we live. When we first moved there, everyone had one for Christmas. But not everyone has the "Elf on the Shelf" that you have. Here, most people have an Elf that the kids will take along with them to places/play with and it comes "alive" at night. The kids get letters from them during the year in preparation of the Elf coming. It is so fun. I am glad that your kids are enjoying Buddy. Don't you wish we had something like that when we were kids. So cute.

Ya'll have a Merry Christmas! (Are ya'll going home?)

What a fun tradition.
Those smiles say it all!!!!

Love the excitement on their faces, and I think Ella is cursing the poor little elf, lol. ;) Good thing Cali didn't touch it, that would have been so sad.

I had never heard of this until you posted it. I think this is a wonderful tradition for kids to have. I think maybe when Catalina is old enough we will do this. It would have been so much fun to have one growing up.

I think Elf has been around a lot longer than we all think. I've had one guarding our presents for many years he usually sits in the tree somewhere perhaps he originated from a story book too a very long time ago. Great story great idea.

I am so glad you reminded me about getting him at the end of last year. It has been fun.. I looks like your girls love Mr. ELf...just as much as Callie. Great pictures.