I thought I'd post an update on the pupster. Zachary officially turned 4 months old on the 6th of the month. This marked an important milestone for him: he is done with his puppy vaccinations! Yea! We can take him to parks and public places now without having to worry about deadly puppy diseases. He can be a real dog now! We have been enjoying taking him on walks as a family and he definitely is too. The weather has been kinda lousy so we haven't taken him as much as we should, but he is still getting pretty great exercise now. Another big milestone is that he can sleep through the night without needing to "go" now. A good 7-8 hours! Life is much better! He is also doing much much better with housebreaking now. Only one, maybe two accidents a week now(vs. the once or twice a day which was going on for a while). And he is still a big fan of crate time-its like his own little place to meditate and rest:) I think we scored big when we bought this little dude. . .
Okay, is he not the CUTEST dog ever? Those eyes make my heart melt and he uses them against me sometimes when I feel frustrated with him:) And you can finally see his eyes again-he got a "puppy cut" last week and met his groomer for the first time. 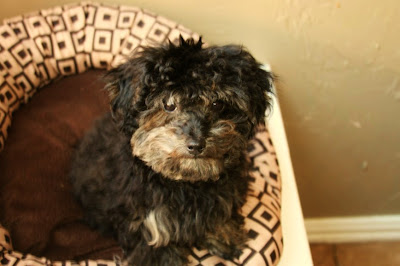 Here is our little scraggly guy on alert. There were some neighbors walking their dog across the street and he stopped what he was doing and just sat there, unsure of what to do, eat them or stare. He just stared. 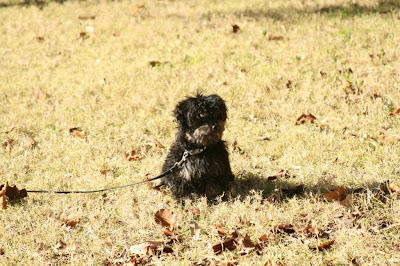 Looking into the sunlight. He loves the sun and laying in the grass basking in it. 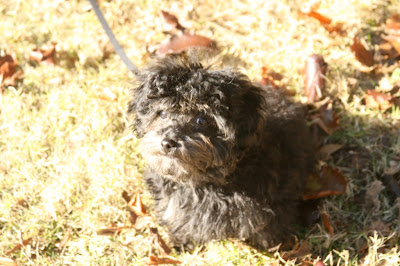 And check it out, he can even write his name. I bet your dog can't do that. 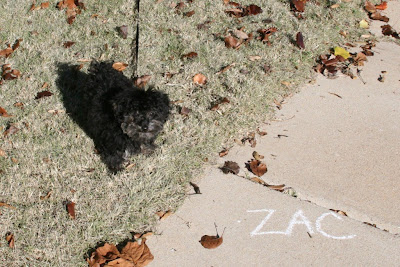 He is cute.. fits right in with your cute family.. btw- ella's recital looked like it was a blast! Love recitals, grew up in them (mom owned a dance company) ;D

haha, I love it, a dog that can write his own name! Kewl!! I just think he is adorable and a wonderful addition to your adorable family! Perfect!! xxoo

what a cute little guy!

Aw, those are some super cute pictures of Zacky-pupster! He's such a good little guy, I love him! :)

He is one lucky puppy. What a cutie.

I've missed you. I am sure that you have been too busy to blog. I understand that but I do miss you. Come over and say hi when you can.

I send love and wish you a very Merry Christmas. Love, Lura

Your pup is too cute. I've been debating about a dog for a while now...erg.