Last weekend was the kids elementary school's talent show. This year the kids showed off some serious dancing talent! Aubrey, Ella & 8 of their friends performed to a 2 minute compilation of 10 different songs, in the dark, with glowsticks on their bodies forming stick people. It was so fun! And I think it was the hit of the show. They were the opening act out of like 35 acts and the crowd was roaring. The smiles on their little faces afterwards were priceless:) So, we had gotten this idea from some women in our ward at church who did the same thing(to different music though) and thought it would be fun for the kids to do. They did such a great job and we were so proud of them! They worked hard on perfecting the moves to each different song and were flawless! All of the practices paid off! 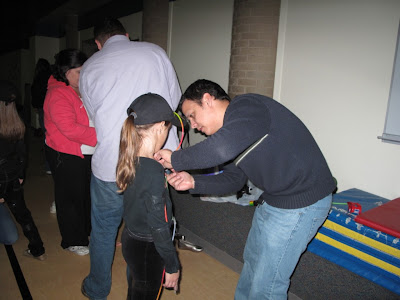 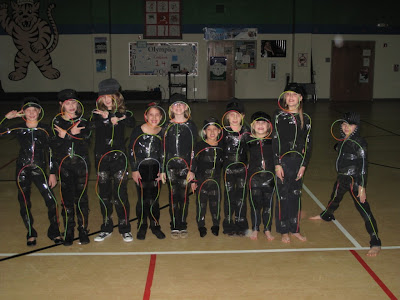 This is the best picture I got during the show. It looks nothing like what it actually looked like because my flash went off and in the dark I couldn't figure out how to turn it off:( So, really, all you could see were the glowsticks glowing, not the kids too, it was pitch black. But oh well, I'm sure you can visualize it:) 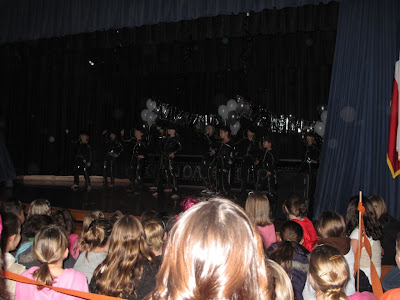 I would love to post a video, but Joey has to get it from off the video camera for me. Hopefully I can post it soon! Its so cool!
Posted by hoLLy at 2/03/2010

It sounds really cool! I can't wait to see the actual video! :)

Yeah it sounds really cool for sure. I was wondering how the costumes actually looked that's so awesome. Excited to see the video. They look so "pro" so are you guys planning on taking the show on the road? Just wondering. Cute cute cute.

I am betting it was just fabulous. I can imagine it. I don't know how to keep the flash from going off in the dark either?