This is a story that is funny to me. Maybe not to you. It could be one of those "had to be there" moments, but I'll still share it:) 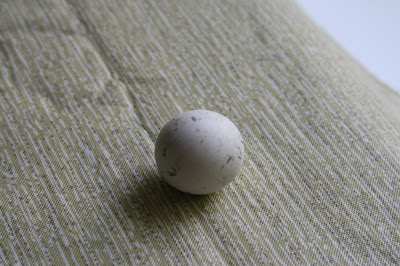 The kids came across this round white ball in our yard a couple of weeks ago. We all thought it was an egg. It was perfectly round, white, slightly heavy, and hard on the outside. It has been really windy lately and a lot of times eggs get blown from their nests, so we searched for a nest around our home to return it to, but couldn't find one. So, when my family was here visiting a few days later, we showed it to my sister(she being the animal expert in the family) and she was like, whoa, this isn't a regular bird egg. We started playing around with the idea of it being an owl or duck egg, because it was so heavy. She asked how long we had had it and I told her several days. She said, well, its dead, whatever it is-lets bust it open! Joey and Taylor agreed. I was slightly horrified by the idea so I said I would watch from far away. I didn't want to have any part in it:) This was about midnight, so it was dark outside. It was also windy. Slightly spooky if you ask me...all I can remember is Tara using some kind of metal stake trying to gently crack it open. No luck. Then the voracity of her cracking became more of a hammer. Then it was like she was beating it to death. I started laughing so hard watching her hack away at this thing in the middle of the night with Joey and Taylor huddled around her. It looked like she was doing something really evil and against the law-LOL. It was late at night and we were just all delirious I think:) Then I hear, "I don't think this is an egg!" And laughing. And then Joey grabs it and throws it against the sidewalk. Hard. That image was hilarious. It made the loudest sound and even bounced a little, but nothing. No breaks, no cracks. It sounded like it broke the sidewalk actually. We were busting up!

Whatever this thing is, its indestructible. And did you notice the gray marks all over it? Thats from Tara's "beating." So, its not an egg afterall. We have no idea what it is.

The funniest part is I can imagine this scene playing out in my mind. Especially Tara hacking away at that thing! hahahaha

That is hilarious I would have filmed it all. I can totally picture it taking place too very descriptive Holly. How did you explain the eggs disapperance to the kids? T-Rex I think your right Joey and of course it is your favorite or was when you played with dinosaurs.

It is of course a ceramic ball, used in check valve assemblies (pumps- chemical). See the following site.

That's my guess but then again it could be a magic bean-- YOU MUST BURY IT AT ONCE!

but of course! everyone knows that those are industrial ceramic balls used in check valve assemblies....

thanks for spoiling the fun dad! lol. actually, now that i know the answer to this mystery, i will be able to sleep better knowing a dino won't be on the prowl. thanks:)

What? You didn't bury it? Are you mad woman? Golden eggs could have been yours for the taking!

lol, good times sister, good times indeed! :) I was laughing when I saw that you posted about this, then continued to laugh harder when I actually read it. And yes, I'm a little sad that we actually now know what it really is. The mystery of it all was rather fun!

I can only imagine Tara and her gusto to do something and the faces she can make - and the way I played it in my head it was hilarious to me!

That's pretty funny. I'd put a bounty down on whoever can split it first.

Geez you gullible guppies - how should I know what it is? It just sounded like a good story..

But if it actually is a ceramic ball.. some of them have a diamond at the core. Hmmmm.

That is so funny. I would thought it was one of those big Gobbstoppers and tried to eat it. That would not have gone well either.

Maybe it is an egg from outer space. Maybe it is a rare treasure??? What a funny story. I can just picture it in my head. If you ever figure it out be sure to let us know.

I am sorry that you were sick last weekend but I am glad that Joey took good care of you.
I send love, Lura

Hahaha!! That is the funniest story!!!

I hope you figure out what it is!

Saturday Ethan was mowing the lawn and he came upon an egg in the grass. He thought it was leftover easter candy so he picked it up and hucked on the patio.

Sadly it was a real bird egg and it splattered all over the place :(