How I Spent My One Week Birthday...

Sunbathing in the tropics. 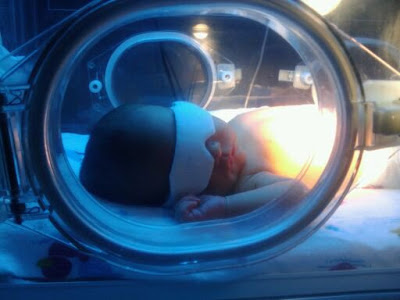 So, I started off with a joke, but this picture really makes me sad! Poor Ammon started turning more yellow over the weekend so we took him into the pediatrician. After tests they admitted him and I back into the hospital to put him under the lamps for jaundice. His level was a little over 18:( It was hard, really hard. I hated not being able to hold him when I wanted to and watching him scream as they messed with him and poked him. Feedings/diapers were monitored closely. And his little heels must be throbbing from all of the heel pricks hes had over the past week. He had 3 from glucose testing(he had low blood sugar at birth), a PKU, and about 8 other pricks for bilirubin checks. So that is 12 in all. He was so tough though. He never cried for the actual poke-it was the squeezing of the heel to get the blood out that made him mad. And he slept most of the time and did really good inside the incubator. He was a trooper. After a day and a half his levels were finally down and we were able to come home. So all is well again. This experience made me think of all the mommies out there who have had preemie babies or babies with extreme problems. Mommies who have had to watch their babies from outside an incubator for weeks/months. I can't imagine going through that. A day and a half was hard enough. I love this little boy so much and we're so happy to be back home. Mostly I'm happy that I can hold him whenever I want now without someone telling me I have to cover his eyes and stick him back in an incubator. It was awful! :( We are so grateful he is okay now and home.
Posted by hoLLy at 9/09/2010

Okay, that picture is just breaking my heart!!!

What a trooper - both of you!

I was the fat baby (9 lb/1 oz) in the incubator when I was born but everything turned out just fine. Well, you know. ;o) Glad to hear all's well now.

Holly, I went through the same experience with my Amanda. Her Bella ruben count was up to 19 and we were so afraid. They did not have the facilities to deal with it at the hospital I had her in and so we had to put her in the car and drive a hundred miles in a snowstorm to get her to one that did. She was in that hospital for about 3 days and then we could bring her home. Those three days were so hard though and her little heels were black and blue from all the stabs etc. She is a very healthy 30 year old today and expecting her first baby in February. I am so grateful for modern technology and all the helps it gives us. I am glad that Ammon is home now and well. ((((hugs))))

We went through that with luke but they gave us a light bed at home.

Poor Ammon! He does look so precious in that picture though even though it's a sad one!

i had a jaundice baby too!