Cali started dance class last week! Its a fun little ballet/tap/gymnastics combo class that she is now taking once a week. I wasn't sure how she'd do in it. Starting back in July, she became extra clingy to me. She didn't want to go to the nursery at church, didn't want to go to library storytime anymore, didn't even want me to go upstairs without her! It was tough, especially with the new baby. The past couple of weeks she has finally show signs of improvement. I can now go upstairs without her melting down:) And she has let me leave her in the nursery the past couple of Sundays with only a couple of tears and not a major freak out. So, we're making progress there. Anyways, her first day of dance class she walked right in. Much different than the clinging-to-my-leg-while-screaming that I was imagining:) And not only did she participate, she was overly talkative and dancing all over the place like a crazy kid. She was smiling and shaking her hips like crazy. She was in her own world but man oh man was she having fun:) I was laughing so hard at the things she was saying to her teacher. For example, she told her teacher, "These shoes used to be Ella's" to which her teacher responded, "How special is that!" Then Cali said, "Sometimes Ella is mean to me." I also saw her last week licking the mirror during class while all the other little girls were sitting down listening to the teacher. Niiice. So basically, not only is she no longer very shy, she is "that kid":) The kid who doesn't listen, the kid who dances to the beat of her own drummer and the kids who says funny things while the teacher is trying to teach. Cali just has a really hard time listening, whether its at home or anywhere else so its pretty funny watching someone else have to deal with it-hehe:) Its funny how all kids are different, doesn't matter if they have the same parents! They all come with their own little spirits and personality. We've learned that with having Cali:) Cali is a cutie, thats for sure. And she is lucky for that. lol
Cali ready for her first day of class 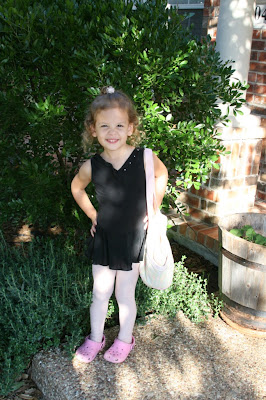 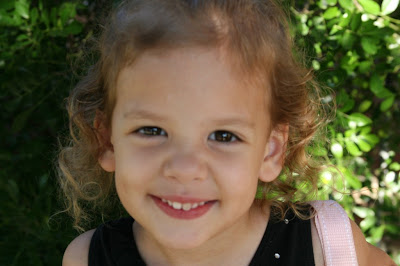 i was cracking up when you were telling me all this and more. :) She's a funny/cute little one.

One of mine smiled through everything. In preschool, if he was supposed to be doing something he would just flash his smile at the teacher and she would do it for him! They do all have their own personalities for sure. That Cali is a real cutie pie! xxoo

I love it. Makes life real. I think that that side has been seen in a line of Duenas' as well including her great-grandfather who was labled in school "the class clown" so yeah blood runs deep in those veins. Gotta love our "Cali" girl she's the best. I can just picture the whole event taking place as you described it very well as I said love Love LOVE IT~~~

OK how funny is this? The "secret" pass word to write on here is "itypodi" what? what? ity podied ts tss

Life is so much more interesting when "that kid" is your kid! She is so stinkin cute that I think she will be able to get away with almost anything! Glad she is becoming a little more independent and less clingy for you - it's hard when you have a newborn that needs your attention and then a child who feels left out because of the newborns needs.