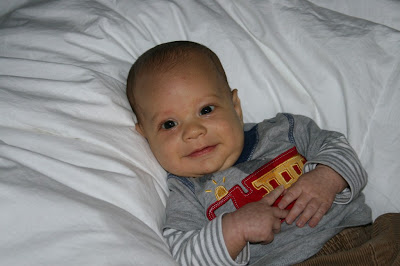 Ammon turned two months old a few days ago! He is such a sweetie. This month his smiles have gotten bigger and he tries to talk more and more every day. I love his happy sounds, seriously angelic. His hands are opening up more and it seems like he'll be trying to grab for things pretty soon. I've seen him concentrating pretty hard on his hand-I can tell he has "found" them and realizes he can control them now. Now he just has to master that:) He started sleeping through the night about 2-3 weeks ago, 10-11 hour stretches(woohoo). We've been blessed with all of our babies sleeping through the night early. So nighttime is set. Daytime has been tough for him(and me!)though. He is just wanting to take teensy cat naps so he wakes up not rested enough and a bit cranky at times. We call him Mr. Crankypants-lol. I also think he just wants to cuddle all the time, he is super duper cuddly. He has a hard time when I put him down or in a little bouncy chair. Even the swing he doesn't want to have anything to do with some days. So, there are some hard moments sometimes(especially since I have 3 other kiddos to take care of too). I can't hold him every second so he gets very unhappy sometimes. Hopefully its a phase that will pass soon. Once he can grab toys, I think he will be more content and more easily entertained. We are also working on trying to get him to love his pacifier-he hasn't been a pacifier lover which I think is part of the problem too. He seems to need something to help soothe him- he really loves his fist in his mouth but can't find it half the time:) The girls all used a pacifier for the first few months of their lives and it helped so much. Hopefully by month three, we'll have figured him out better and he'll be happier more often! Cuz when hes happy, he is SO happy and SO sweet. We love this little guy! 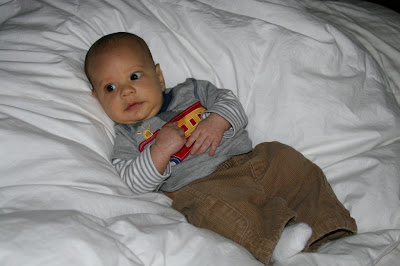 i cant believe how big he looks in those pics! what a stud. :)

What a little sweetie pie. He sure looks like his papa!! My goodness but these two months have flown by so quick! xxoo

Aw, he's grown up so much! I can't wait to see him again and hold him! :) Make sure he gets a good nap beforehand though. hahaha

He's so dang adorable!! He's going to be so stocked once he masters his hand-in-the-mouth action!!! :-) I love that he's a cuddler.

Wow he's growing up so fast! What a handsome guy! Almost 3 months now :)