Cali's first trip to the dentist 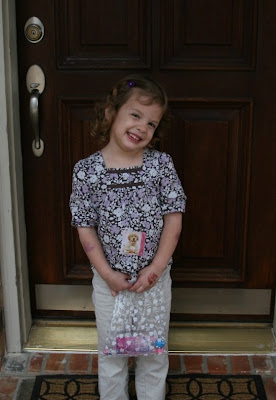 So I decided to get Cali in to see the dentist last week. It went amazingly well! I wasn't sure how she'd feel about sitting in that chair with a stranger poking around in her little mouth, but she did it. She opened up her mouth and did a great job! She had no problems with it. The hygienist said she did better than some of the older kids even. I was really proud of her! Before she went in she told me, "I'm shy to go in there." And then I told her she would get a special coin afterwards to put in the prize machine. . .she perked right up after I told her that! I also told her about the little fun bag they would give her with a new toothbrush, floss & toothpaste and she was really excited. Oh, and something funny. Afterwards, when they gave her the coin for the prize machine, she picked the machine with tattoos. Thats my girl. She loves her some tats. Hopefully, she doesn't when shes older. . .or that could be a problem :)

Good for Cali. What a brave little gal. Tell her that I am proud of her.

John told me to thank you for liking his hat. I give him a hard time about it. ha

Have a great week.
Hugs

Wowee!! Things have changed since I was over here. Your girls have grown and you have a baby boy! Congratulations! I am excited to start reading your hilarious stories again. :)

She looks so grown up in that picture. Yay Cali for doing so good at the dentist.

Go Cali! I'm proud of her and how brave she was. Anything for a prize eh? :)

I was wondering if all those marks were tattoos or if she'd had a run in with a wall or something. :) Glad she did so well, way to go Cali!!!

What a brave little girl. Well done Calli! Tell her I am 55 and I still get nervous when I go to the Dentist. Once you get to my age they don't give you special coins anymore. They take all your coins! lol xxoo

Congratulations Cali girl. I am very proud of you and you are very brave. Nana is not so brave like you. I think Marie is right they take my coins darn. I'm glad you are doing the right way and going early good job mommy.

Good for her! For most kids (and even some adults), the dentist can be a little scary. She did do a great job, and it looks like she'll have no trouble taking care of her teeth when she gets older. But tattoos would be something to worry about several years from now, ha ha! XD