On March 27, 2011, my sweet Grandpa Adams passed away. This happened just 13 days after my Aunt Jeanie(his oldest daughter) passed away. Its been a sad time in our family. It was strange that one week he was sitting next to me after my aunt's funeral and just days later, he was gone and I was at his. I still can't believe hes gone. It happened quickly-a massive heart attack. His health hadn't been good for awhile, but it still happened so suddenly. I remember that last conversation I had with him and I remember having a feeling that he didn't have much longer. I'll never forget sitting by him on that couch in the stake center and chatting with him. He made a joke about cell phones(he was always joking:) And I remember him saying to Ella, "Are you still my little sweetie?" And she smiled a big smile at him. I am also so grateful that I was able to go to their 60th anniversary dinner last month. A memory I have from that is helping to pin his boutineer on that my mom had bought. There was something about doing that that made me smile. I felt like I was his date:) And he looked so handsome sitting next to his beautiful wife.

I sure loved him. He was one of the sweetest funniest men alive. He was also a hard worker and a man of integrity. I will miss him so so much. I will never forget his funny jokes, his false teeth that he used to bewilder the kiddos with(he'd pop em out and freak em out:), knuckle sandwiches, big strong hugs, how much he looooved golf(rain or shine), how he called everyone a mullet, that smile of his, but most of all how much he loved all of us. He was a good man, husband, father, grandfather & great grandfather. He and my grandmother had 11 children! And together they have over 80 grandkids(grands and great grands)! His impact on the world was great.

I thought I'd share a few of my favorite pictures of him. Here is his from his younger days lookin all handsome. He was such a studmuffin:) I believe this was when he was receiving an award for military service. . . 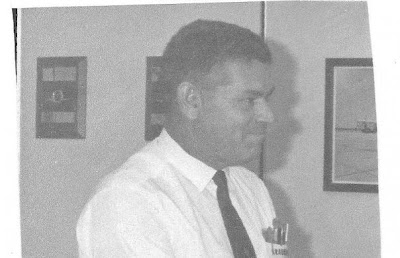 This was from last year I believe. In his older years, he took up the game of golf. And he golfed as much as he possibly could. Even when he started having health problems, he was out on that course! He loved that game with a passion. He looks so cute in this picture with his golf tee hat on. 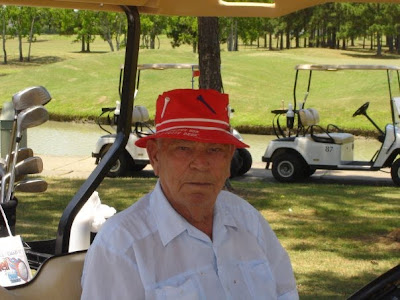 And here is a picture Joey snapped of him and I together a couple of Christmas' ago. I'm grateful Joey did that because I believe this is the only picture I have of him and I. I remember sitting by him that day having a conversation about Facebook(Yes, he was on Facebook! Thats how cool he was:) 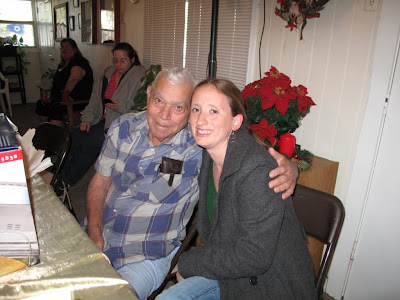 I love you Grandpa and will treasure every memory I have of you. I'm so grateful for all you have done for me in my life. Also, thank you so so much for taking the time to write your history. That was the best gift ever. I will read and reread it and pass it down to my kids and it will continue to be passed down. You are an amazing person and your legacy will live on. I look forward to when I'll see you again. What a great knowledge it is to know that life continues on and that families can be together forever. . .xoxo hoLLy

ahh, I can tell he is the kind of man/grandpa you are truly going to miss. Very nice post. Cherish those memories.

he will be truly missed. he's such a wonderful person and i know we will see him again. i'm sorry honey for all the loss on your side of the family. it's heartbreaking. i love you.

You have some lovely thoughts and memories of your grandad here this morning Holly. What a blessing they are for you. You are so lucky that you got to know your grand dad like you did. I never knew mine. We lived so far away and my parents couldn't afford to travel to see them. Thanks for sharing this lovely tribute with us. I am so glad that you have that picture of the two of you together. ((((hugs)))) xxoo

What sweet memories of your Grandpa. That is a nice picture of you and him too. I know you will see him again too.

Dear Holly,
I am so sorry to hear about your grandpa. He died 2 days after my accident. I am sorry that you had 2 loses in just 13 days time. I know that your heart must be heavy. Thank goodness we know that families are forever. For a while I was wishing I had been there to welcome your grandpa home. However, I am getting braver as the pain gets more bearable. I guess I have work left to do here on earth. I had better get well and get busy.

Thank you for my sweet Holly Angel.... that is what I call her. She is beside my bed on the window sill. She reminds me of your love and makes me smile.

I will pray for your family at this 2nd time of loss. I am sorry. Hugs, Lura

I am sorry that you have had 2 loses so close together. Sounds like your Grandpa was wonderful man. What a beautiful post about your Grandpa.

How sweet. The fond memories are what comforts us in the hard times. Thanks goodness for the Plan. xoxo