The Champions are back!

One of my sweetest friends, Kim Champion, and her family are back in Texas! We met them back in 2002 while we were still living in Corpus. Joey and I only had Aubrey at the time and the Champions were this fun young couple with no kids yet. We hung out with them and a couple of other couples a lot, had bbqs, Sunday desserts, game nights, etc and had lots of fun together. Then she and I became pregnant within just a few months of each other and both had kids around the same time. Me with Ella and Kim with her first child, Avery. Then, they moved to Houston. . .:( Then, we moved to Austin. . .Then, they moved again. And we moved again. And then they moved like ten times! They have been all over the place(Texas to North Dakota to Chicago.) But finally, they are back in Texas! And not only are they back, but now they are only one hour away from us! WOOHOO! I'm so happy to be able to see her more often again. We went years without seeing each other and I was sad:( We were reunited a couple of years ago when I visited her in Chicago and that was a fun visit. But before that, it had been like 4 years since I had seen her. Sucks when that happens! Life does that sometimes, pulls people apart:( But I'm glad it brought us back together. Heres to hoping they stay in Texas! :)

Last weekend we went to their new pad(gorgeous new home!) and Rand barbecued for us while the kids played. It was fun to see the whole Champion family again! Our kids had never played before! Thanks guys for having us. Our turn to have you over next! 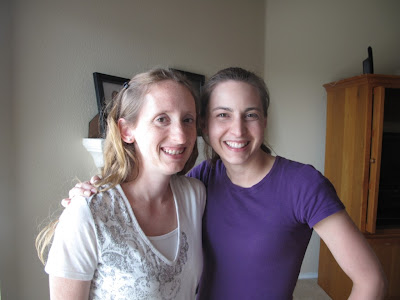 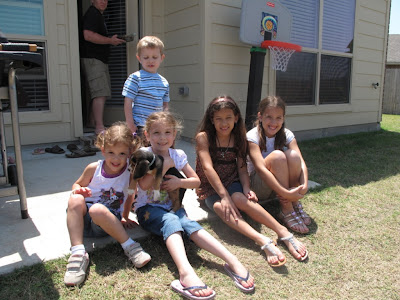 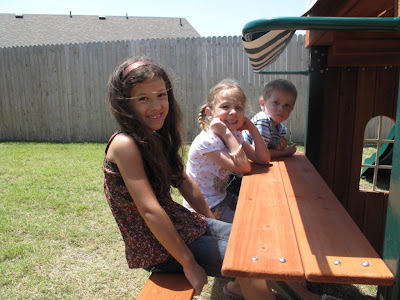 Yeah for friends. Looks like it was a gorgeous day as well. Fun times for all of you.

Looks like you all had a wonderful time together Holly!! Hooray for great friends that live close enough that you can do fun thing with. I remember your trip to Chicago. I believe you wrote about it and it sounded like a blast! Here's to many years of future good times together! xxoo

Wow! A post all about us! We are very glad to be back by y'all! Oh, and you forgot to mention Tennessee ;). It's ok, I even have trouble remembering where all we've been. It was awesome spending time with your family and we need to get together again soon! Love ya!

That was from Kim, not Rand!

ya know, i originally wrote tennessee and then i thought, wait, maybe not. i got confused. then i panicked, and deleted:) you guys just move too much!! haha. hopefully all that moving has come to an end :) love ya too! (and i figured it was you kim)