In N Out Hits Texas

The west coast sensation, In N Out, has finally come to Texas! And not just Texas, but 15 minutes from our house! And of course, we went as soon as we could. No, we didn't go the first day it was open. . .we didn't really want to wait for two to three hours to get a burger. We did drive out that way just to see how busy it was and it was seriously unbelievable. The drive thru line was MILES long. And people were lined outside in the rain waiting to get a taste holding their little umbrellas while it thundered and stormed. It was so funny. There was even a chick on the news later crying about it, thats how happy she was. Hilarious. We love In N Out, but we aren't that crazy :) I've never seen crowds like it. Well, okay, honestly, we would've stood in that line and waited if we didn't have 4 young kids:)

So, it was a few days after it opened that we headed out that way for dinner. Joey called me late in the day from work and said, "Its time. " Joey is from Southern California so he is a big fan. And he introduced it to me a few years ago and I converted:) Forget Whataburger! I know, I'm totally betraying my Corpus Christi roots, but In N Out is better. It just is. I think it is the king of fast food burgers.


So the line was still pretty long to get inside so we did the drive thru, which was still a good 40 minute wait. We put a movie on in the car for the kids to watch, Disney's Aladdin. From the looks of this picture, you would think we were playing a horror film. LOL. Joey and I were laughing so hard in the front and I secretly took this picture. That scary Aladdin movie. . . 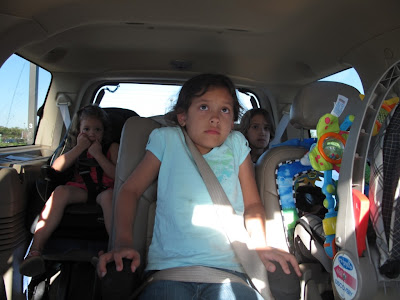 Their little faces quickly changed once they got their hats, milkshakes and dinner. They loooved it. Ella finished her first hamburger, ever, in her life. She usually only eats half. See, its good stuff people. Aubrey said it was the best burger ever. Cali's favorite thing was her choclate milkshake. They keep asking to go back! I would have to say their first In N Out experience was awesome. Maybe next time we'll actually get to eat inside:) 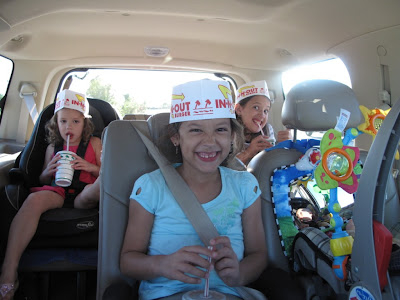 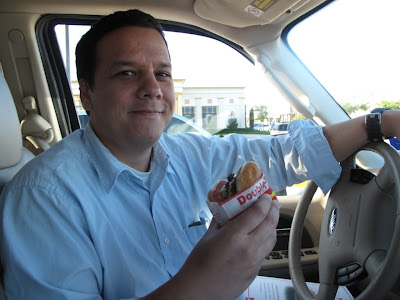 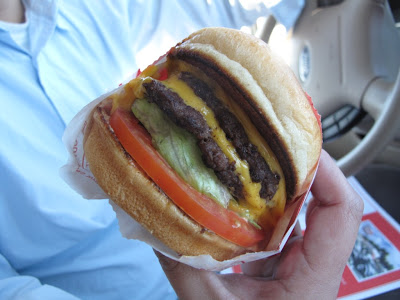 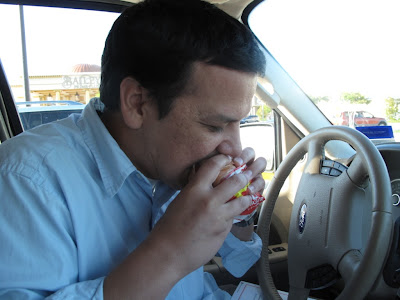 And here is dorky little me. I like wearing the hat too. And making stupid faces. 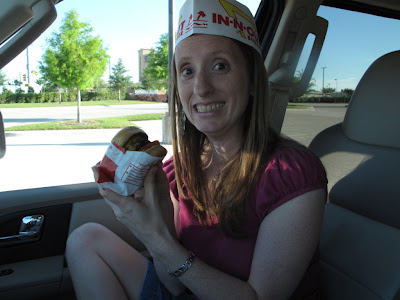 It is so awesome that we have In N Out so close now. And not just one, but actually two close by! Joey has one about two minutes from his work in Frisco. Lucky man. I better not find out about any secret In N Out runs without me. . .j/k
Posted by hoLLy at 5/25/2011

Ah finally! I'm so happy that we have one so close now!!!

We haven't made it yet. Soon.

We are still waiting to go. We are pretty excited though! And your hat makes me want to go even more. :)

p.s. your hair looks good! Did you straighten it or something? It looks different...

Any burger place that gives out cool hats like that must be great! The close up the burger does look seriously good though! I'm sure they'll never have one over here though, so I will just have to dream. xxoo
PS the kids are adorable as always!

Thanks for coming by and visiting my site and for putting a button on your site to Mommy Giggles!!!

I want to follow you, but I didn't see a follow button on your site. I will have to figure out how to follow you manually :)

If you have a button for your site I would love to put it on my "Favorite Mommy Blogs" - I actually really did enjoy your blog :) I've been visiting a lot of them lately and there are a few like yours that stand out :)

I found the Follow Button on the top! I'm must look ridiculous :)

Your pic is so cute! I will have to wait until there isn't a line. :)

You are so lucky! In N out is the best!!