Cracklin Oat Bran is one of my favorite cereals, second only to Lucky Charms of course:) I treat myself to it every so often. Joey isn't a fan of it and has told me that he thinks it looks like dog food to which I reply something like, "Whatever dude. More for me!" :) Don't diss my cereal man! Anyways, the other day while Cali was at the breakfast table eating her cereal, she looked at my box of Cracklin Oat Bran and said, "Is that dog food?" And I thought for a second, What? How could she look at this box and think it looks like dog food? Was Joey right?! I was feeling a bit confused and also like Joey had triumphed. He was right dangit. If an honest four year old says it, then it must be true. . .I've been eating dog food for years. 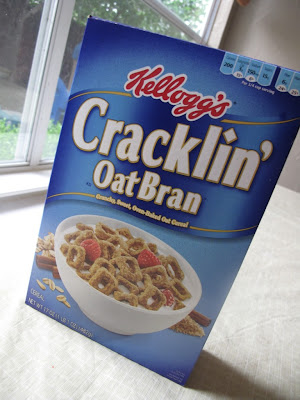 Untillllll I walk over and she points to the side of the box. . . 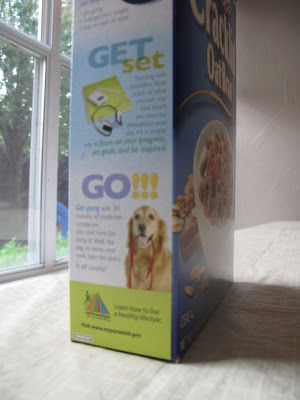 Ohhhhhhhh. :) So I'm glad Joey isn't right. Hehehe. She just saw a picture of a dog on the side. Phew, I can keep on enjoying my cracklin dog er I mean oat bran.

Kelloggs might want to rethink the picture of the dog on the side of the box.
Posted by hoLLy at 6/21/2011

This post really made me lol...u heard me! Im still right ya know :-)

you are the one that needs to eat this stuff ya know...you take forever in the bathroom... bahahaha

Oooooh....that was low. well i'd rather be mad dash holly than big crap joey.

Meh, good things come to those who wait.

you can keep your crappalin oatbran!

Holly I am with you! I love, LOVE Cracklin Oat Bran. We can't get it over here and I miss it. I try to get my fill of it when I go home every three years or so. If it's dog food it's mighty tasty dog food!! xxoo

That is funny! Cute it looks really healthy!

I've thought the same thing, too, but it tastes good so WHO CARES. ;o)

It does look a little like dog food! I love it too.

Ya know, I thought the post was pretty funny until I read the comments. LOL You two crack me up!