Ella told us last month that she wanted to try out basketball. Joey and I weren't really sure it would be her "thang" but what the heck, gotta let kids try what they wanna try!(well other than dope or something:)  She started practices in December and just really loves to dribble and shoot. And she is becoming a very good dribbler! We are really happy with her coach, Coach James-hes a good coach and a good guy. Not one of those that yells all the time and gets too into it. You can tell he loves coaching and wants to help the kids learn and have fun. And of course he has a daughter on the team too.

Ella's first game was against the hardest team in the league, the "Hot Shots"(and they are very good and act like little hot shots too...arg) Poor Ella-she had never played a basketball game in her life...or much less even watched one! So she looked so worried and unsure of what to do during the game. It was so hard to watch! I thought after the game she would cry, but she didn't. They lost really bad and she looked scared the whole time, but she was okay. She is a trooper. And she was ready for practice and the game the following weekend. I prayed the morning of her second game that it would go better. Family was in town for her baptism that evening and she was worried that they would see her not do very well. So I prayed hard. And my prayers(and hers and Joeys:) were definitely answered. Their team won! And not only that, she looked confident and did so much better..and even BETTER: she scored!!!!!!!!!!! And I even caught it on video, suh-weet. I'll try to upload it here soon. So, I seriously had to fight back tears when she made that basket. I was just so happy for her. After seeing her first game and the fear and disappointment in her eyes and then to see her so proud and happy, made me sooo happy:) I was thankful that day she was able to shine, especially in front of her grandparents! And I was so grateful that our prayers for Ella were answered.

She is having a great season and is learning so much. She is surprising us with her determination to try hard and get the ball. I didn't think she had any aggressiveness in her(she is just a mellow kiddo) but she does! We are very proud of you Ella!!! So glad you are having fun and improving each week!!

The first four pics are from her first game. As you can see she is one of the point guards(is that what they are even called still? She dribbles:) The last two are from after her second VICTORIOUS game! Lots of smiling faces that day. 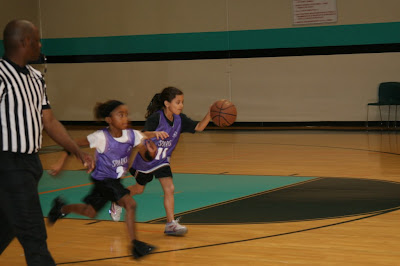 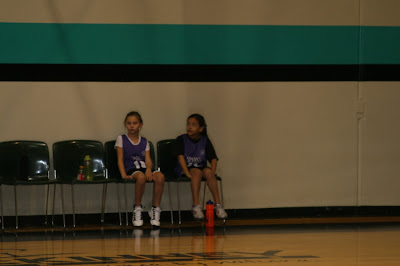 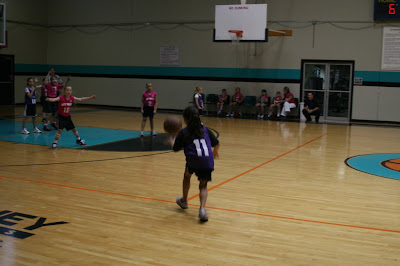 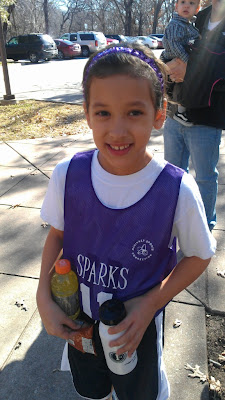 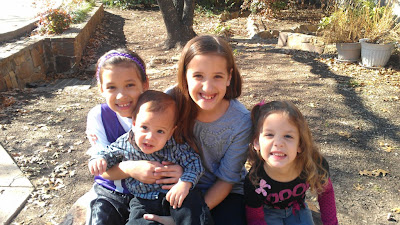 Yep it was hard to believe it was only her 2nd game ever! She moved the ball down the court like a pro. The 2 pointer was icing on the cake!
Keep practicing Ella, you're a natural athlete.
Love
grandpa