Last year, as an Activity Days leader in church, I helped our girls perform in a stake cultural event. Our group chose the Pacific Island as our culture to share. I helped the girls make a million poi balls and taught them some mad poi skillz I had learned from a friend of mine growing up(she had lived in New Zealand) Then they performed in front of the stake activity day girls at the stake activity. It was so fun and they did so good! That led Aubrey and I to the idea of doing something similar for the school talent show this year. Honestly, when the talent show came around, I was hoping Aubrey would forget:) I wasn't feeling good at all in the first two months of pregnancy(heck, I'm still not feeling great, but improved) and we had just put our house on the market, so life was difficult. But when she told me about it and how badly she wanted to do it, I couldn't say no. And this is probably her last year at this school so I thought she should go out with a bang:) Our new idea for this show was to make the balls glow in the dark somehow. And then we thought of black light. With the help of Joey(he bought the ginormous black light, cut the music cd, and zip tied neon socks to our poi balls from last year-thanks babe!), we got everything ready. Aubrey called a few of her school friends and formed a "poi posse" as they named themselves. Her and I spent a couple of hours figuring out the choreography and song(We picked "We Found Love" by Rihanna which had a perfect beat! Really fun!) We had a few practices at our home and then one final one at our church gym. It really came together. When the night of the show came, I was a little bit nervous. This was my baby:) We had all worked hard on it. But I knew they had practiced hard and would do great. And they did! They were the opening act out of the two hour show and really started the show off right. The crowd was cheering and clapping and the girls were so proud. I was so proud! They were the coolest most creative act of the night(Okay, I'm biased but it was awesome:) All the lights were out and the poi balls looked so amazing glowing in the dark! Everyone was talking about it afterwards and it brought me joy to see how big Aubrey & Ella were smiling(Ella had a special role as well:) I'm going to try to include a link to the video clip. It may not work anymore, but oh well, here are at least pictures if it doesn't! The last couple of pictures are from the pizza party we had the next week at our house. It was time to celebrate! And my good friend Susan, whose daughter performed with Aubrey, brought cupcakes from my new favorite cake shop, Nothing Bundt Cakes. YUM!
The poi ballers dressed in all black(so you could only see the balls glowing) and Ella was this funny little character glowing bright that would run out and dance periodically. She also had a mask on that gave her this funny face. She was a hit! 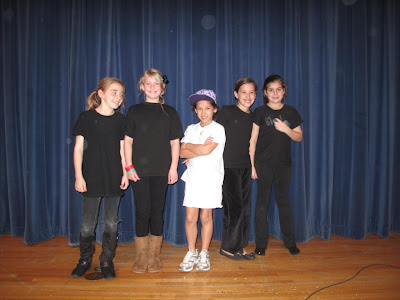 At the end, they turned around as the "BOOM!" sound effect Joey added sounded. The neon duck tape letters glowed really bright! And Ella threw glowing confetti. It was pretty cool! 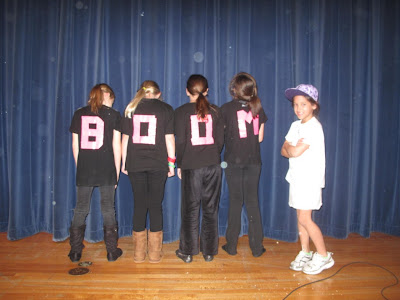 A sweet surprise from Joey afterwards... 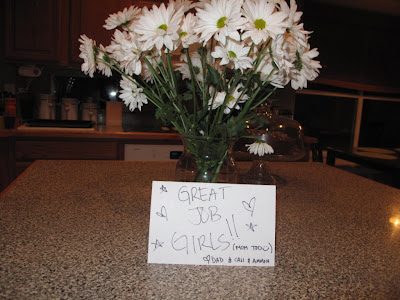 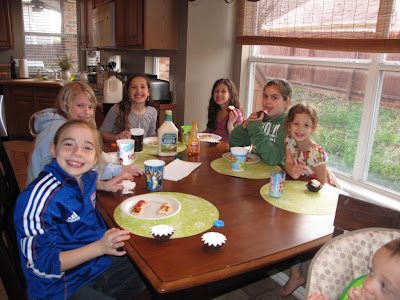 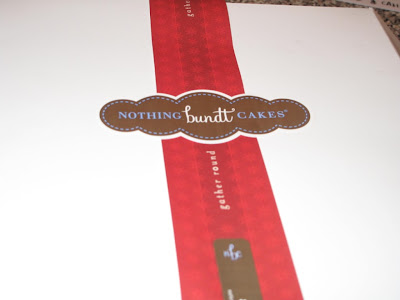 ﻿In the end, I was really glad we did it. And really proud of all of the girls!! The hard work and sacrifices I had to make paid off as they made a memory that night they will never forget.
Posted by hoLLy at 2/17/2012

The only thing I wish I could have improved on was well............being there to see it all in person. I just imagined it all and was able to watch the clip for a little bit when mom posted on FB. You guys were great and I felt the excitement for you. I loved it all and Ella you were the beam that helped to light it off perfectly. Love all of you and thanks for all the hard work and for all your friends for being a part of it. And to daddy of course for being the greatest rigger ever always has been always will be......comes from working along side his papa and Memory Makers, and he continues to help make more memories along side his family. Yeah for Talent Nights at Schools.

I loved the video you sent me. They did an awesome job. How fun for your girls.