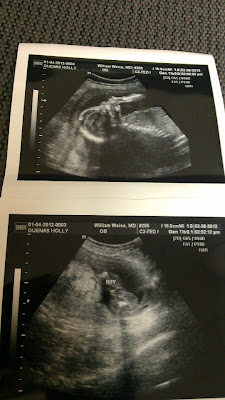 We can't wait to meet you
Wesley Dean!﻿
The big sonogram day was yesterday! When people would ask me what I thought the baby was, boy or girl, I honestly didn't know. I was leaning toward girl just because well, we seem to make a lot of girls! :) But I admit to hoping that it was a boy. I really wanted Ammon to have a little brother! They could share a room, be little buddies, it would be perfect. We had picked out the first name, Wesley, years ago(its been a favorite of mine since I was a teenager!) The middle name we weren't completely set on. We were leaning toward Charles, because its a family name of the great grandpas on both sides of the family(thought that would be cool to honor two people at once!) but then I felt last month we should change the original plan. I felt this impression that maybe he was supposed to be named after my Dad instead. I talked to Joey about it and so we were pretty sure thats what we would do. Still not 100% but thats what we recently talked about. Well, I go to preschool to pickup Cali on Monday and while I'm there I start talking to a couple of friends about the sonogram coming up. As I'm talking I look up and right in front of my face is a picture(a bunch of the kids artwork was lining the hallways for display) and at the bottom of the picture is written in kids writing, "Wesley". I was like, oh cool, I don't see that name too often anymore and thought it was a cute coincidence. Then I look over at the picture next to it and the name on that picture is yep, you guessed it, "Dean." I had this "whoa" moment and had this feeling right then and there that this baby is a boy. And that his name is Wesley Dean. I told Joey about it. I told him I'm either crazy or this is a sign:) I was hoping I wasn't a nut! I think he thought I was-hahaha. And sure enough, at the sonogram my feelings were validated as the sonographer told us with excitement "Its a boy!" I admit to shedding a tear or two:) We were so happy!  I feel so blessed. Three beautiful wonderful daughters and now two amazing sons!  We can't wait to meet you little Wes!
Sidenote about the sono: We have a very very active son!(which I knew because this baby kicks pretty much all day long) It was hard for the sonographer to get the measurements she needed. Took her awhile to find out the gender too. But we got two good glimpses so we are sure:)  He actually did a somersault during the sonogram, so I think we better get ready for a busy kiddo:) He also was sucking his fingers during the sonogram, it was adorable!!
Posted by hoLLy at 3/29/2012

Yea! Growing up there was a guy in ward named Wes Dean who was a musical wizard.

Congrats! I'm so excited for you and your family! How fun that everyone gets at least 1 brother and sister.

That is such a cool story Holly. It's so meant to be. I know he is going to be thrilled to be joining your family!