During Christmas Break, I had to think of things to keep the kids occupied so as to not cause myself to go crazy...oh, and to make these little people happy too:) One day I told the girls we would have a "hairstyle day". We watched youtube videos and learned how to do a few new things with hair. Then I practiced on them and we did "model" pics :) I'm not great at doing their hair. Aubrey was born with a VERY tender head(okay, I'll admit I have a very tender head too...) so she would barely let me touch it when she was little...and has a hard time now even. And its so thick(but gorgeous!) that its hard to work with. And then Ella and Cali's hair took so long to grow(but once their hair started to grow, wow, they have amazing curls!) so I never had much to work with. And now these days, when everyone is older and has lovely hair to work with, its just hard for me to have the time to do these elaborate creations I see other moms doing. You'd think with three daughters, I'd be a pro. Nope. I'm not. So I made a goal this year to learn some new things and so far, so good. I'm better at french braiding now and I've sent the girls to school a few times with some rad hairstyles! And I've even curled Aubrey's hair a few times. Go me. But its definitely not a common occurrence. Because with three girls..that's a heck of a lotta time to put into each little head of hair in the mornings before school. And when the baby wants to be nursed and Ammon wants breakfast and I'm trying to get everyone out the door for school, half the time, we headband it:) I don't see how people do it so much! Anyways, here are some pics of our day of hair. . . 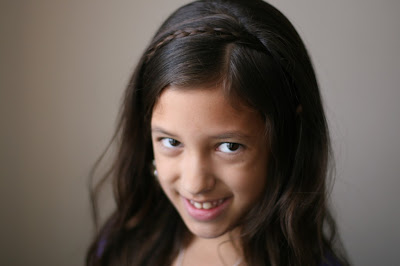 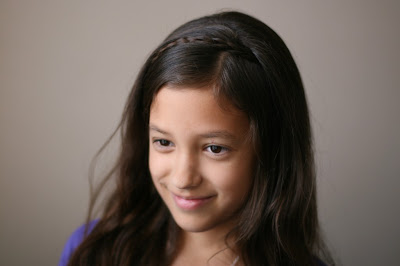 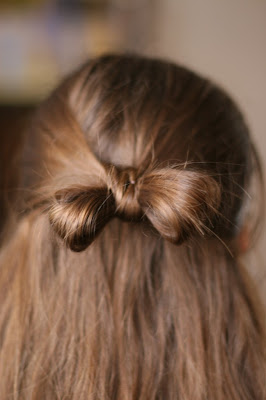 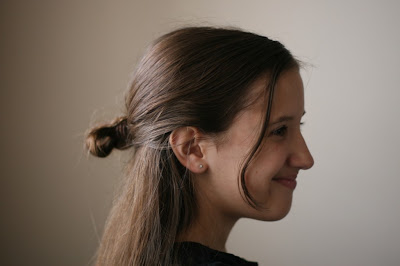 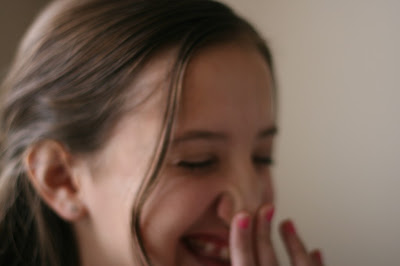 Waterfall braid that I did later that evening. My first attempt. Not perfect. But still very pretty! 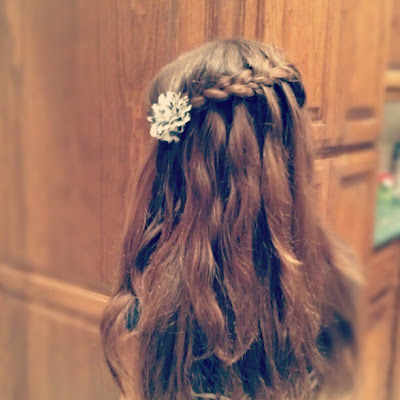 And I've never been great at french braiding(like this year is the first time I've finished one on someones head without it falling apart-haha-this just isn't a strength for me people! Whats weird though is that I can french braid my own hair just fine. I'm whack.) So anyways, this is a miracle for me that I can finally kinda do one. This is a picture from a few days later. I did a french braid ponytail for Ella's basketball game one Saturday morning. I told her it was a lucky braid. And sure enough it was. She made her first basket of the season that game! :) 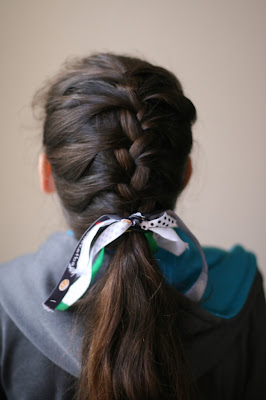 These styles look awesome! I dont know how you can do these. I can barely put their hair in a pony tail.

All the fancy styles look great to me. I think you are better at doing hair than you give yourself credit for. I am impressed.Your girls look beautiful.
I'm not good at doing hair but I wish I were. My grandgirls are all better at it than I am.

I have good news. Stop by my blog when you have a minute. Hugs, Lura

Wow, I am so impressed Holly! You did an amazing job with the girls hair. I wish I had had YouTube to help me when my own girls were growing up. I would have so loved doing different things with their hair. It would have been so much fun! I think you are just the most amazing mom ever. Love you to bits! xxoo

After reading your post, I went to click on the "Like" button before I realized this wasn't Facebook. I'm stupid. hahahaha But I think they all look great! I don't know how anyone ever has time to do all those crazy hairstyles for their kids. I'm very impressed; you go girl!

Wow, they look really stylin with their new hairdo's!!

i forgot to tell you these pics look pretty professional. :)