I wanted to take the time today to dedicate a post to my Uncle Ricky, who passed away in July. He was the "big brother" to all of my mom's siblings. Jeanie was the oldest and Ricky was next in line...and now they are both gone :( It was unexpected and devastating. I have many fond memories of my Uncle Ricky, not just as a kid and growing up, but as an adult as well. He was the Uncle who was outside playing with the kids during the holidays. While most adults were inside, eating and talking, he was out with a ball and a bat...or a football..any ball he could get his hands on :) He was the one teaching all the kids how to swing, how to throw & how to catch.

Ricky is also the father to one of my favorite cousins in the world, Chrystal(who is also quite the sporty gal:) She is a wonderful person that I love dearly and a true friend. It broke my heart to see her lose her father, but I was very glad we could make the trip down to Corpus to be there for his funeral. It was good to be with all of our family together...uniting in the midst of sorrow. We've lost a lot of family members over the past few years and its a tough time when that happens. But I have felt of a greater closeness when we have to lean on each other and support each other during these times. Its true that family is the greatest gift we have on Earth.

Another thing I remember about Ricky was his smile and his laugh. He was always kind to me and you could count on him for a smile or something said in jest/joking (reminds me of Grandpa in that way). What I loved most about him most recently was watching him do those same things he did for me and my sibs/cousins as children, for my own children. They loved to be with Uncle Ricky outside during the holidays with all the kids. He was the center of attention. He was so good at rounding up all the kids and starting a game of something :) They also have fond memories of "troll hunting" with him at night...it scared the bejeebers out of my kids but they loved it! haha. The older two girls also remember a special hike they had with him while we were at the family reunion back in I believe 2006? He grabbed a stick and led them around the hills/mountains on a beautiful summer afternoon:) They had so much fun. One of the things I mourn most is the fact that my boys are too little to remember who he was(and is). They won't have the "Uncle Ricky" memories that my girls have and that makes me so sad. But I do know, that in the end, we will see him again someday. I'm grateful for my faith and knowledge that families can be together forever. 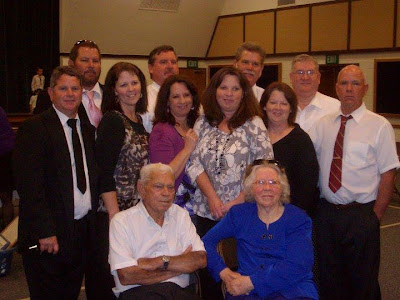 This was one of the most recent pics I could find. Its of my Mom's family at my Aunt Jeanie's funeral. Ricky is on the far right. I searched through pics to find the one of him golfing with Joey, but I can't find it darnit. I know its here somewhere. Joey has many good memories of golfing with my Grandpa and Uncle Ricky. Sad that those golfing buddies of his are no longer with us...

That was a very sweet post. I can't believe we've lost so many family members just within these past couple of years. :-( They will all be missed so very much.