See this kid here? He's a maniac. These pictures don't even come close. But they give you a taste of how "all over the place" he is ;) This is how he sits during the first 10 seconds of family scripture reading and family prayer. And then a few seconds later he is flipping off the couch. And then a few seconds later he is running in circles. And so it goes. Don't get me wrong, I love this little crazy one, but wowsas he has become quite the busy child this year! He likes to climb things. He then falls off said things. He typically has a bruise on his forehead or two or three. Not long ago he hit his head so hard on the corner of a wall that he had a serious goose egg. Like on the looney toon cartoons! In my almost 14 years of parenting I had never seen a childs head stick out like that after a bump. It looked so bad! He runs around or rides his little indoor bike all around at lightning speeds. No walking allowed. He doesn't care if you are in the way either. He makes a way. At the expense of toes and shins...lol. He is also very loud. He isn't quite talking yet(we will be getting some speech therapy soon it looks like)..but he communicates what he wants with lots of noise. And he lets you know when he didn't get his way with lots of noise too :) They say no two kids are alike. Well in this house, that is definitely true. Each child has their own little personality for sure. We've never had anything close to a Wesley! Haha. While I joke that he is a maniac, he is also so fun and so funny. He makes us laugh alllll the time. And he is also so loving and a little mama's boy for sure. If I pretend to cry, he'll do anything I ask, I think he must love me or something :)And he is also just plain adorable. I mean look at those dimples and that smile! Ahhh, he kill me with his handsomeness. We love you our little terrible two year old Wesley boy! ;) Here's to hoping when you turn three, you might slow down a little bit for mommy please? She is tired. 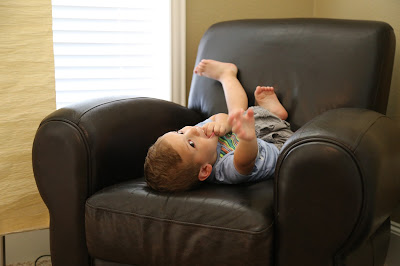 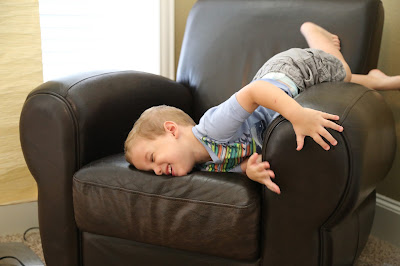 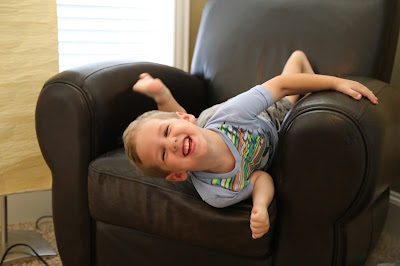