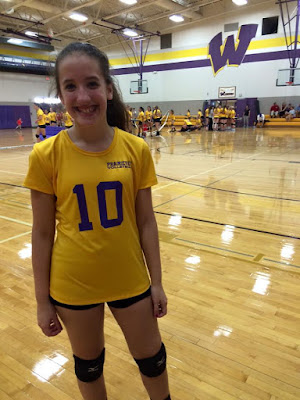 With a new school, comes a new mascot/team/colors! We are now wearers of the colors purple and yellow...not my favorite but Ella is happy as purple has always been her favorite. :) So Aubrey made it on the volleyball team at her new school! Its honestly not as fun/not as well run as her previous schools team so its been frustrating at times for her. Volleyball isn't as big of a deal here. We thought that would be a good thing-more opportunity to shine. Its just been frustrating though since no one is doing anything right. The program is lacking. But in Aubrey fashion, she makes the best of everything and just does her best. She has improved a lot on her own, her overhand serves have become more powerful and very consistent. She made the B team(though she totally should've been on A seeing as that there are seriously kids on A that can't even serve! It seemed kinda rigged..they are taller..and the coach actually said at the first practice for whoever played club to stand over here...whatever.) Turns out "club" here isn't quite the same as where we came from. And Aubrey is better than half the club players here. Arg. Anyways, on the bright side, she was chosen to be one of the setters and did REALLY well. I think she's a born setter. It was fun seeing her do something different. So that was a plus. I hope next years experience is better though. The coaching just was not good..we saw no improvement all season for the team as a whole.  A lot of useless drills that were the exact same every day. Sooo different than the strong program at her school in Texas. Her team was awesome last year and were the District Champs. They didn't start off that way but because of the coaching methods, they became unstoppable. I know this year she really missed her old coach and teammates :( She loved that coach so much. But being part of the team here in Iowa, though it wasn't ideal, was a great way for her to meet new people and make friends. And mostly a great way to feel part of something which is important when you are the new kid. She overall had a good time. We are proud of you Aub! You are doing great! Stay positive, keep working hard and keep smiling:)
Posted by hoLLy at 10/21/2015